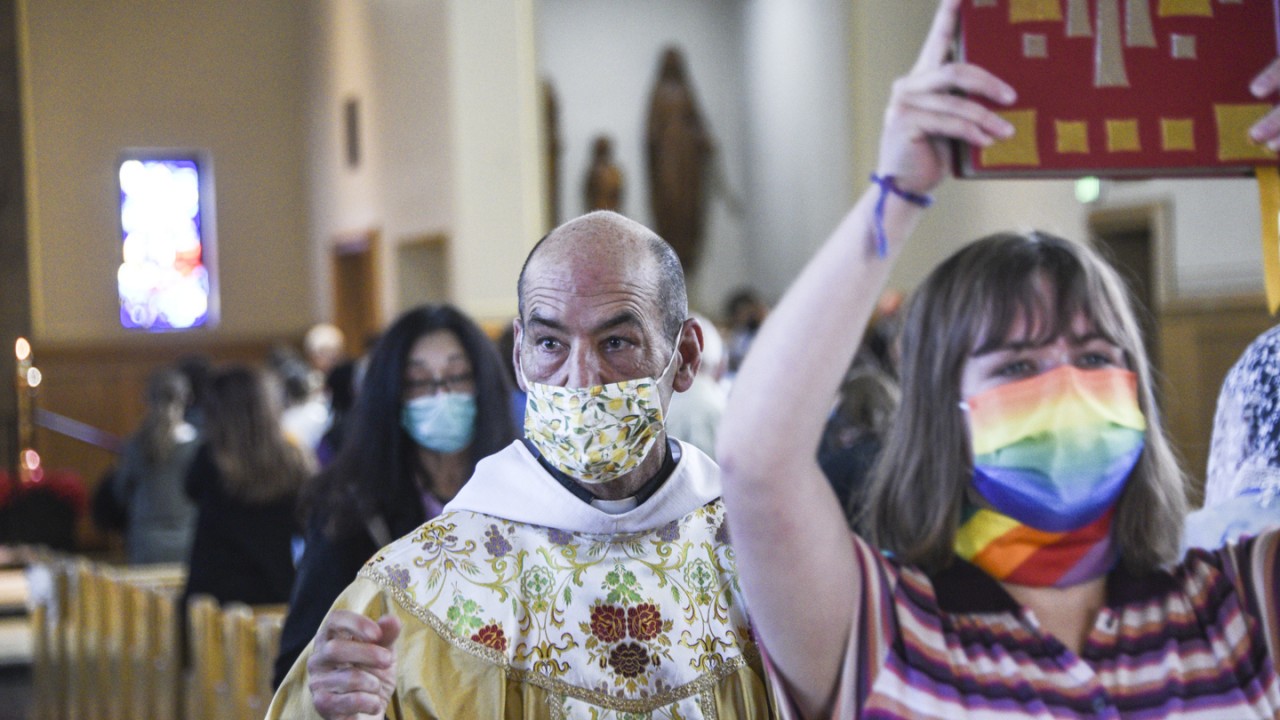 After a Catholic priest asked a student to take off her gay pride shirt, classmates mobilized to support her

For the 12-year-old student at St. Francis of Assisi School, wearing a favorite old t-shirt with a gay pride message on “Dress Down Day” was nothing new. She had worn it before without a problem on casual dress days, she said. the drink.

But last Friday, at the end of mass she and her classmates attended next door at St. Francis of Assisi Church in northeast Baltimore, the shirt caused a stir:

At the request of Father John J. “Jack” Lombardi, according to witnesses, school officials told him the shirt should come off. Her homeroom teacher forced her to remove him in front of the other students as they stood at the back of the church.

â€œFor the rest of the day, everyone was very angry about it,â€ said his 7th grade classmate Dylan Hoffman, speaking at mass this morning.

He and dozens of other students, along with parents and other adults, showed up at church wearing rainbow-striped gay pride Covid masks. Many also wore white T-shirts with the rainbow-colored message, “I am a child of God.”

Hoffman said the students organized the demonstration of support as a way to support their classmate whose mother is gay.

â€œI think it was really horrible what happened. The way they asked him to take it off was really embarrassing, â€said Liam Hines, another 7th grader.

â€œIt was like asking him to take a piece of his family away,â€ said Hines, of Lauraville. â€œWe can’t leave this slide. It was really cruel.

â€œI am very proud of these children,â€ said his father, Sean Hines, who stood with his arm around his son and also wore a pride mask at church service.

The shirt that a student of Saint Francis of Assisi was told not to wear by the principal. (JM Giordano)

The student who was forced to remove the shirt (whose mother requested that her name not be used) said that when asked to do so, she “was left confused”.

The message on his rainbow striped jersey, â€œPROUD 365,â€ is meant to show his commitment to the dignity and respect of LGBTQ people every day of the year, not just during pride season.

After being ordered to remove the shirt, the student was called to the office by principal Karmen Collins, who told him that she had broken the school dress code.

â€œShe said it was because it was a Catholic school,â€ the student said. “I thought that was a bad excuse.” 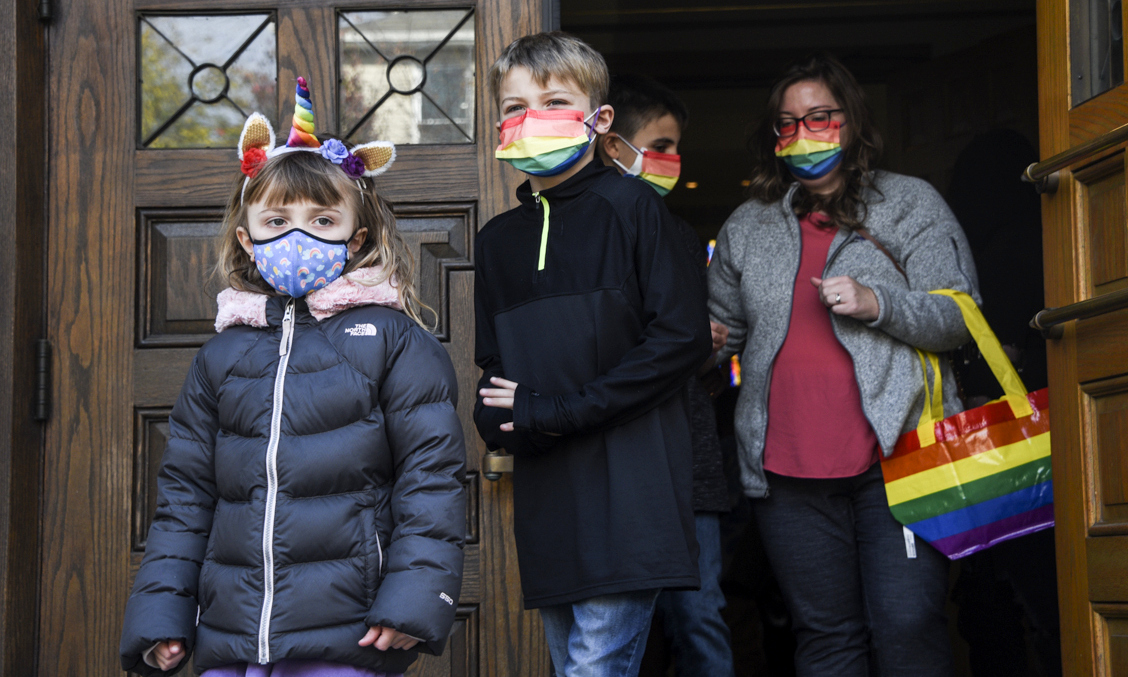 A demonstration in support of the Church of St. Francis of Assisi after a student was asked to remove a shirt affirming gay rights. (JM Giordano)

Response from the Archdiocese

While Lombardi noticed the plethora of gay pride masks dotting the congregation on the pews today, he showed no sign of it. (The slogan of his sermon was “The kingdom of Christ distorts human fiefdoms.”)

The only recognition across the way came from one of the officiants, Lauren Voos, who also wore a Pride mask. Voos managed to slip a direct message about the incident into the call and answer part of the service:

â€œFor marginalized populations and gender identities. . . she said, and the congregation responded with an additional volume, “Lord, answer our prayer.

As the priest and worshipers exited the church, located at 3615 Harford Road, Lombardi declined to discuss the incident.

“I will remain peaceful today,” he said, referring to the drink to the Archdiocese of Baltimore.

In an emailed statement this afternoon, Christian Kendzierski, the archdiocese’s executive director of communications, defended Lombardi’s actions, explaining why the student “was asked to change his outfit before returning to class: “

Noting that “the church teaches that every person should be treated with respect, compassion and sensitivity,” he said the Archdiocese understands the concerns about what has happened and “is working on plans to bring the community together in order to discuss this in an open, honest and listening manner. 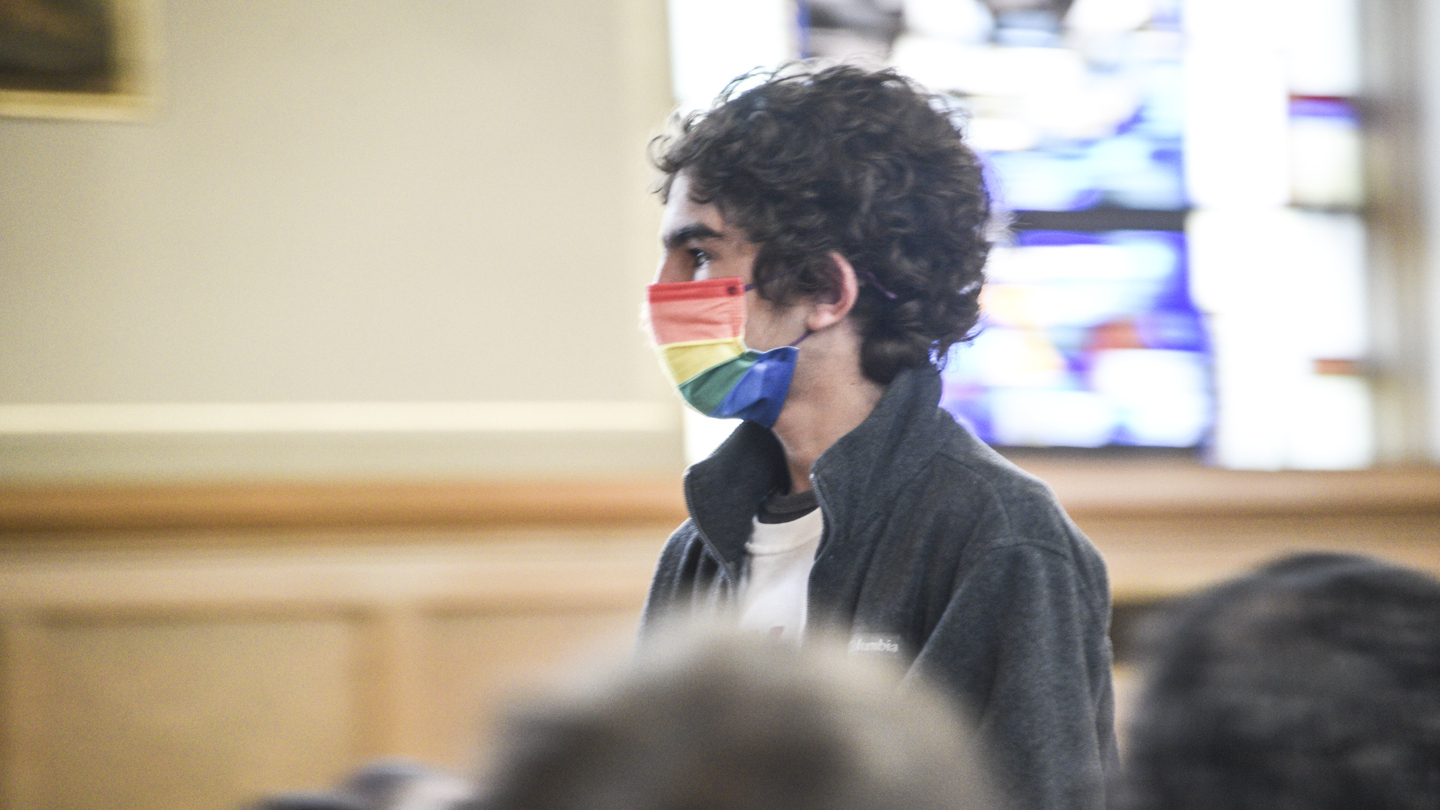 A classmate stands up for a student who has been told to take off her Pride shirt. (JM Giordano)

“I have felt in danger recently”

Many adults attending the protest said the harsh treatment inflicted on the student did not reflect their church experience until July, when Lombardi took over as pastor.

“My family has three generations in this church,” said Meghan Murphy, a supporter of the protest, who wore a shirt that read “Be you.”

According to its website, the church dates from 1927 and the school from 1957.

â€œAs a homosexual woman, I have never felt unsafe here, but have felt unsafe recently,â€ said Amelia Voos, who said she had been the youth coordinator for the church for more than three years. years.

She said that she and her mother, the church’s longtime religious education coordinator, have a long family association with Saint Francis of Assisi.

â€œI grew up in this parish. To think that this is happening here is painful, â€she said. 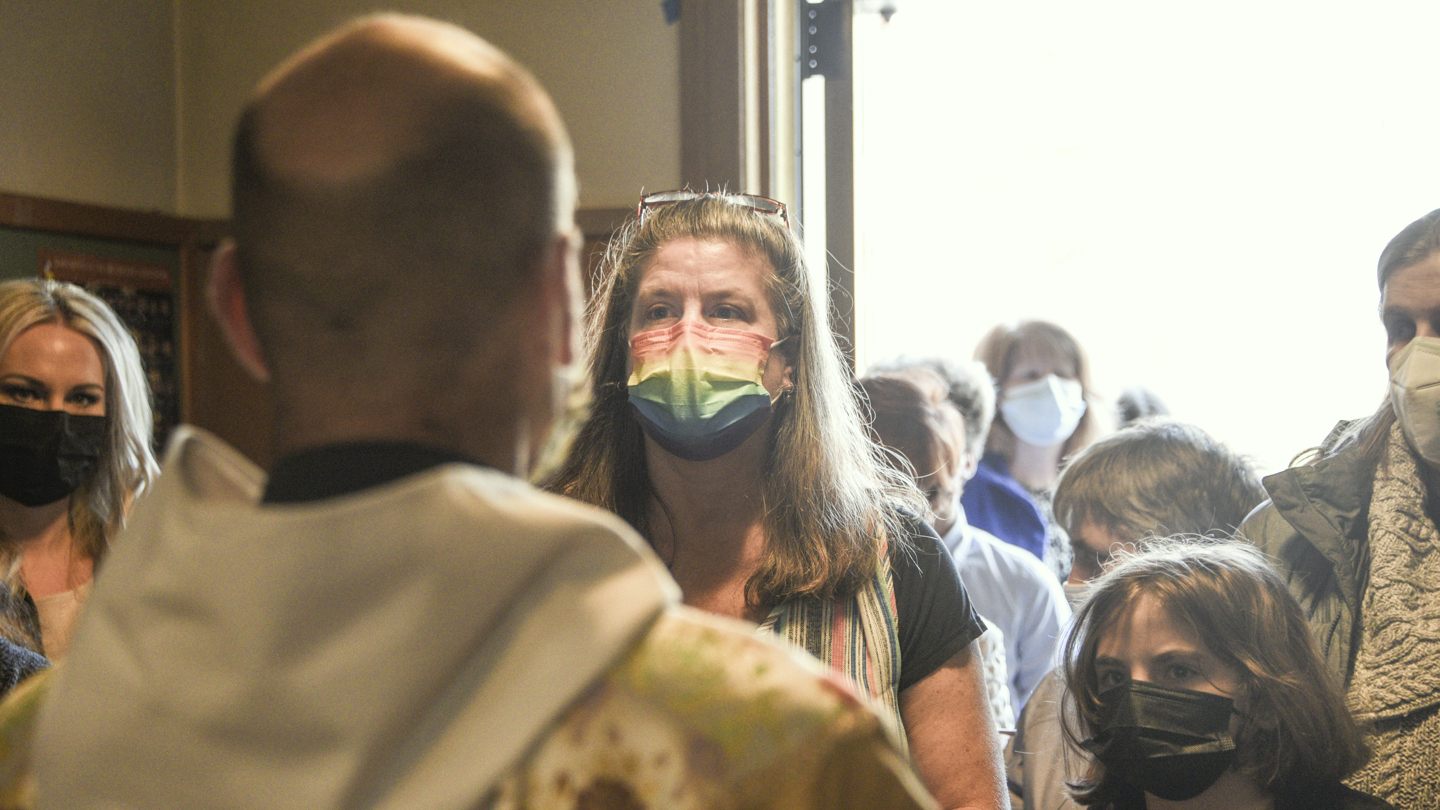 Lauren Voos faces Father Jack Lombardi today after a mass where many protested the treatment of a student with a gay mother. (JM Giordano)

Amelia Voos said she and her mother resigned their church posts last week, but was unable to discuss the specific incidents that prompted them to do so.

Speaking on behalf of the church, Kendzierski said he had no information about it. â€œAs a personal issue, the former employee would hopefully have followed the reporting channels and therefore an investigation or query would have started,â€ he said.

Others who took part in today’s demonstration showed that they still have positive feelings towards the institution. A boy who wore a mask of pride carried the hosts to the front of the church. Some of the other church members wearing pride masks could be seen dropping money into the collection basket.

As for the mother of the student at the center of the controversy, she indicated that she was awaiting a response to her complaint from the superintendent of Catholic schools in the Archiocese.

â€œI hope this translates into diversity and inclusion training for staff and the church,â€ she said. “And an apology would be nice.” 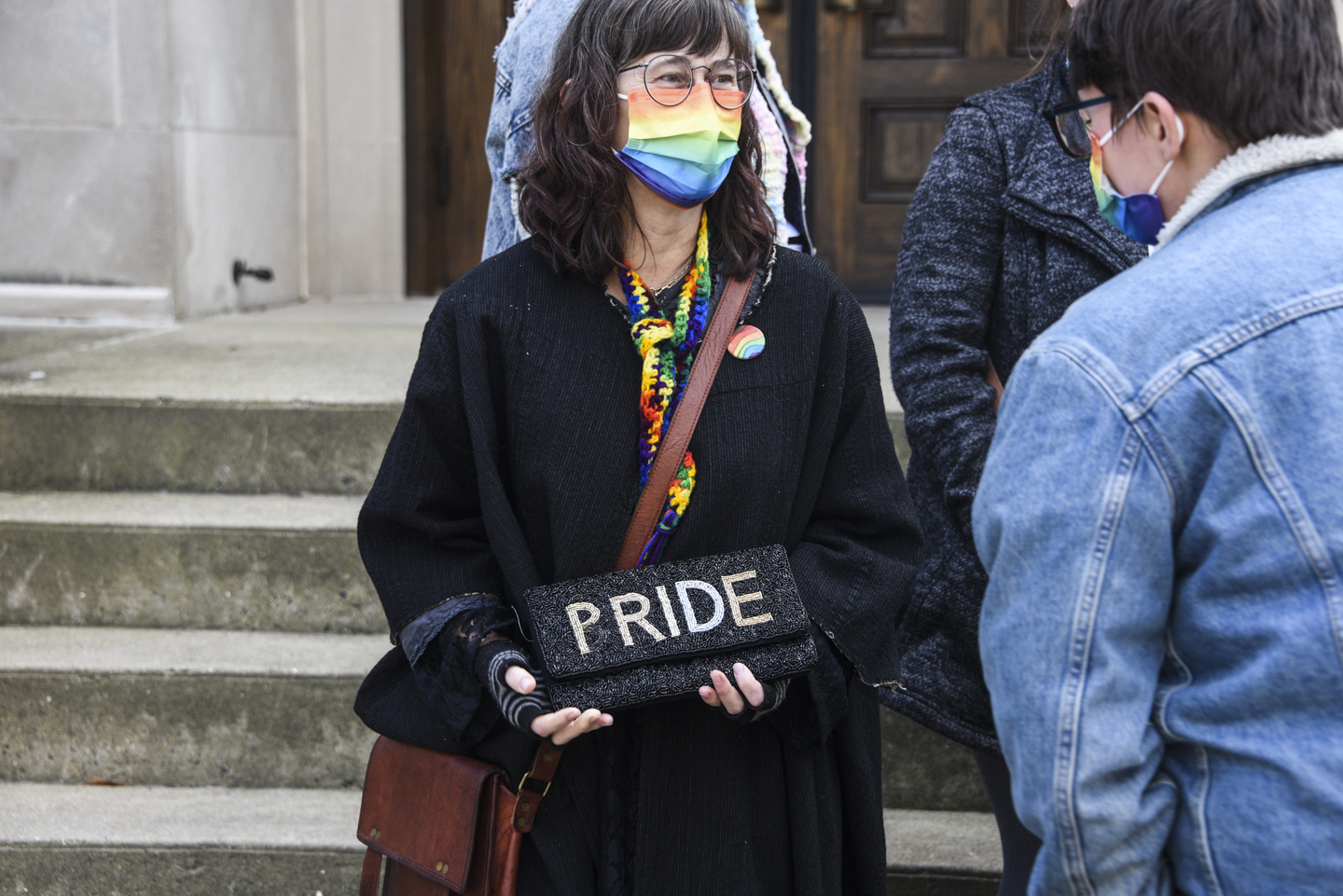 Some linger outside after showing their support for a student during Sunday mass at St. Francis of Assisi Church in Baltimore. (JM Giordano)

The faithful, a constant departure from the rules