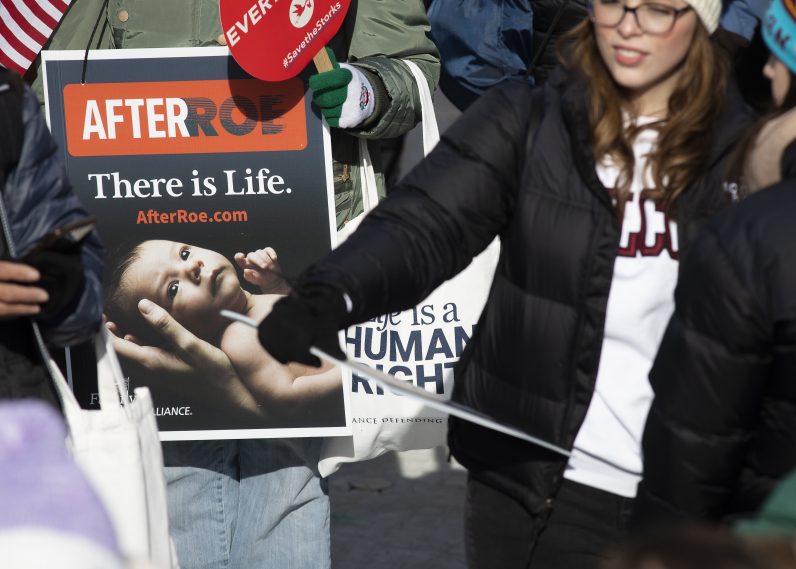 All urged to pray, work for ‘a post-Roe America’ that cherishes human life – Catholic Philly

WASHINGTON (CNS) – If Roe falls, “my hope is that we will come together and seize this opportunity to create a post-Roe America where human life is cherished and nurtured, and where family is recognized as the true foundation of a just and prosperous society,” said Archbishop of Los Angeles, José H. Gomez.

“Abortion was one of the first social evils opposed by the early church,” the archbishop wrote in his “Voices” column in Angelus, the archdiocese’s online journal, ahead of the Roe’s birthday on January 22. “This commitment has never changed over the centuries.”

“During the past half-century of legal abortion in America, the Catholic Church has sought to create a culture of care and compassion for women facing difficult pregnancies and to promote alternatives to abortion such as adoption,” he said. “At the heart of everything we do is our belief that human life is sacred, that each person is created in the image of God and redeemed through the love of Jesus Christ.”

Archbishop Gomez said that, as Pope Francis has said, “we can never allow abortion to be considered a mere ‘private’ or ‘religious’ matter.

“Abortion attacks the ‘sacredness of human life’, the Holy Father reminds us,” he added, “and societies that deny life to the unborn child threaten the foundation of all other human rights”.

The Catholic Church “has a duty to bring this perspective to our national conversation about the type of America we want to create after Roe,” added Bishop Gomez, who serves as president of the United States Conference of Catholic Bishops.

“We must insist on what Saint Pope John Paul II called ‘the necessary conformity of the civil law with the moral law'”, he added. “American history proves that when our laws do not reflect moral law, it leads to the worst injustices. We have seen it with slavery, segregation, abortion and euthanasia.

He also called for “bold thinking” moving forward “on how we can support women and children and promote strong marriages and families.”

The day after its January 19 column appeared, the California Conference of Catholic Bishops released a statement committing the Church to “actively support and advocate for policies and services that enrich the lives of women, children, and families.” of California”.

— Accompany “our sisters… in your journey towards motherhood”.

— “To unite our state’s life-affirming pregnancy shelters, centers and clinics, creating an accessible statewide network to support women facing difficult pregnancies and in the early years of parenthood .”

The Catholic conference said it would also “advocate for transformative family policies,” including increased access to affordable housing, prioritizing homeless pregnant and parenting women, and expanding paid leave for families.

His list of priorities came as Governor Gavin Newsom and the state’s “pro-abortion” legislative supermajority pledged to turn California — which already has no restrictions on abortion — into a ” abortion sanctuary” for the nation if Roe is overturned when the Supreme Court hands down its ruling this summer in a case involving Mississippi’s law banning most abortions after 15 weeks.

In Texas, retired Bishop Michael D. Pfeifer of San Angelo issued a pastoral statement to mark Roe’s birthday saying the “staggering scale and incredible number of abortions worldwide” make abortion “the most urgent, greatest and most serious moral pastoral problem facing the world”. the Universal Catholic Church and the Church in the United States.

“As we pray and encourage all Catholics and pro-life Christians around the world to join together to end the enormous scale of abortions,” he said, “we focus our attention on our country and let’s work with our bishops, priests, religious, deacons and all dedicated laity to make a great new effort to pull America from the brink by those who believe in the constitutional principle of life, liberty and pursuit of happiness for all, starting with the little people in their mother’s womb.

“Choosing life for both mother and child” must be “our constant pro-life motto,” he said.

He added that “as followers of Jesus, we understand that when a nation abandons the belief that all life matters from the start, the end result is barbaric” – a result “which we must now work to overcome”.

He urged his fellow bishops to “make a concerted effort as pastors and leaders of our people to speak out firmly with a united voice” against abortion and called for the development of prayer programs, “centered on the ‘Eucharist’; “constant prayer” of the rosary in front of abortion centres; and be “much more proactive in promoting pastoral action, formulating pro-life plans for all Catholic parishes in our country.”

Bishop Pfeifer echoed the hopes of many that the Supreme Court would overturn Roe, but also called for support for the Life by Conception Act, introduced by U.S. Sen. Rand Paul, R-Ky., in early 2021 .

The legislation would implement equal protection under the 14th Amendment “for the right to life of every human being born and unborn.”

During the annual Diocesan Mass for Life on January 21 at St. John the Evangelist Cathedral, Cleveland Bishop Edward C. Malesic told the congregation, “We are all part of God’s plan. . Every unborn child is also part of God’s mysterious plan.

He called the Roe decision “an erroneous judgment in 1973” and said “it remains erroneous in its interpretation of the Constitution”.

He too said that the faithful should hope that the law will change, but “unless we change our minds and our hearts,” we will not get very far in becoming a type of society that reflects the kingdom of God.

People will not be converted to the gospel of life “by the arrogant voices of judgmental people, but by the persuasive power of the love and forgiveness we have found for ourselves in Jesus Christ, our Lord,” Bishop Malesic said. “And women will only choose life if we give them a way to choose it, ease their fears and give them a safe place to give birth.”

“Keep praying for the unborn” and dream big, he added. “But we also have to act. Our children are counting on us.

The Florida Conference of Catholic Bishops in Tallahassee, the public policy arm of the state’s Catholic bishops, said the church is “committed to accompanying all women, including those experiencing unplanned pregnancies or who are considering an abortion.

Florida dioceses, he said, are on board the United States Conference of Catholic Bishops’ Walking with Moms in Need initiative, which connects parishioners to volunteer opportunities at community resource centers. on pregnancy.

“We wholeheartedly support this ministry which provides tangible and vital support to vulnerable families – fathers, mothers and their babies,” the state Catholic conference said.

“The Catholic Church categorically and unreservedly defends the rights of the unborn child,” the conference said. “We look forward with hope that God will soon bring our nation to a profound awareness of the dignity of human life and the recognition that all lives deserve the protection of the law.

In a January 12 column in Catholic New York, the Archdiocesan Newspaper, Cardinal Timothy M. Dolan of New York said he still had Christmas on his mind as he contemplated the January 22 anniversary of “the horrible decision” Roe v. Wade – who he added makes January respect life month “by default”.

“At the center of the story, when BC becomes AD, there is a mother and her baby,” he said. “Babies are what it’s all about. … Where would we be without babies? Well… extinct!

“Nothing brings hope and promise like the birth of a baby, the sure sign that creation, life and civilization continue. God knows where we would be if babies were not at the center, if infants were considered like a curse.

“Yet… are we close to that?” He continued. “Far brighter people than me talk about an ‘anti-natalism’ in the culture, where pregnancy and babies are seen as a burden, where conception and pregnancy are seen as a threat to liberation and personal development.”

Cardinal Dolan noted that just before Christmas, “Pope Francis lamented a ‘demographic winter’. In his beloved Italy, he noted that the number of deaths last year exceeded the birth rate. It’s haunting!

The late Robert Kennedy – “who beamed” at his children – said “the health of any society can be measured by how we treat babies, the frail and weak old people,” the cardinal said. “We may be missing!”

“’Choose life, so you can thrive!’ the Bible exhorts. No babies…no life; no babies… no civilization! he said.