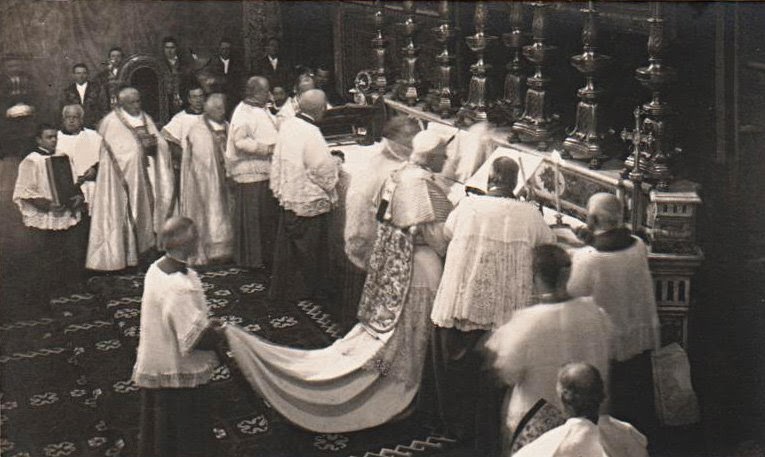 The cath.ch website has published a two-part study titled â€œTheâ€œ Modern â€Mass versus theâ€œ All-Time â€Mass,â€ which attempts to show that Paul VI’s Mass was just as traditional as the Tridentine Mass. The arguments that are made in support of this mandate a response.

The first argument put forward is that of “active participation”, which appears eleven times in Sacrosanctum Concilium, the constitution on the liturgy of Vatican Council II. The article attempts to bring its authorship to Pope Saint Pius X.

But this attempt is based on a gross misconception. There is ambiguity – that is, a distinctly different meaning – between what is expressed by Saint Pius X, as well as Pope Pius XII, and the conciliar constitution.

It should be noted first that the Pope of the anti-modernist oath uses the term in the motu proprio Tra le sollecitudini from 1903 – which relates to sacred music. The holy Pope makes â€œactive participation in the sacrosanct mysteriesâ€ â€œthe first and indispensable source of the true Christian spiritâ€.

But to know what he meant by this expression, we must consider how Saint Pius X will carry out this program.

Concerning the faithful, participation is approached in two ways: by encouraging the restoration of Gregorian chant to make it accessible to the faithful; and by promulgating two decrees: one on the communion of children from the age of reason, and a second on frequent communion. Song and union with Christ through holy communion: this is what Saint Pius X means by â€œactive participationâ€.

Pope Pius XII also spoke on the subject in his masterful encyclical devoted to the liturgy, Mediator Dei, dated 1947. Faced with the drifts that were emerging, the Pope in turn took care to characterize this â€œactiveâ€ participation.

The angelic pastor encourages “all Christians” to “participate in the Eucharistic sacrifice … not in a passive and negligent manner … but with a care and fervor which unites them closely with the High Priest”.

Pius XII goes on to show that this participation consists essentially in identification with Christ, citing Saint Paul in particular: â€œHave within yourselves the sentiments which were in Jesus Christ. This requires “that we mystically die on the cross, … that we become, with the Immaculate Host, a single victim pleasing to the Eternal Father”.

This is why he encouraged the publication of Roman missals for the faithful, so that â€œunited with the priest, [they] pray with him using the same words and with the same feelings of the Church.

And Pope Pius XII gives an explanation full of common sense and pastoral solicitude which fixes the intention of the Church. He first says that â€œmany of the faithful are unable to use the Roman Missal, even if it is written in the vernacular; and not all are able to understand correctly the rites and the liturgical formulas.

In this case, they can â€œmeditate with love on the mysteries of Jesus Christ or perform other exercises of piety or recite prayers which, although they differ from the sacred rites, are still essentially in harmony with themâ€.

In the conciliar text, the term â€œactiveâ€ participation has a double meaning. For many bishops this meant what Popes Saint Pius X and Pius XII described and explained.

But for the innovators, this meant an “active” participation, by which the faithful are responsible for a more or less important part of the material realization of the ceremony: readings, acclamations, giving of gifts, and even distribution of Holy Communion. .

Thus, there is a rupture between the concepts of Saint Pius X and Pius XII and the conciliar concepts. Direct proof of this fact can be provided. A 1974 text from Paul VI states: â€œHowever, it is a mistake to recite the Rosary during the celebration of the liturgy, although unfortunately this practice still persists here and there. (Marialis worship, no. 48, February 2, 1974).

What Pius XII praised as an attitude in all respects in accordance with the spirit of the liturgy, Paul VI condemns as an error.