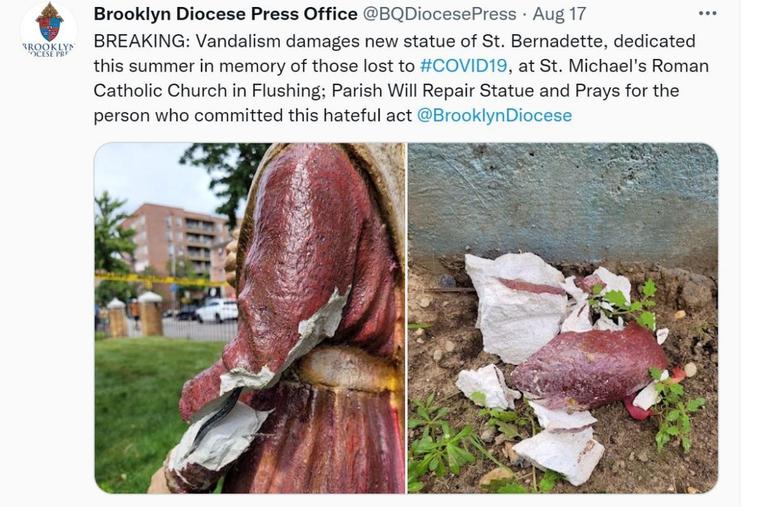 Incidents include arson, destruction of statues, and degradation of church buildings and gravestones with swastikas and anti-Catholic language.

Incidents include arson, destruction of statues, and degradation of church buildings and gravestones with swastikas and anti-Catholic language.

â€œWhether those who have committed these acts are troubled individuals crying for help or agents of hate seeking to intimidate, the attacks are a sign of a society in need of healing,â€ said Archbishop Thomas Wenski of Maimi, chairman of the USCCB committee on religious freedom, and Archbishop Paul Coakley of Oklahoma City, chairman of the USCCB committee on national justice and human development, wrote in a July 2020 statement.

â€œIn these incidents where human actions are clear, the motives are still not. As we strive to understand the destruction of these holy symbols of selfless love and devotion, we pray for all who caused it, and we remain vigilant against others, â€the bishops wrote.

The last incident included in the report took place on September 5. Vandals carved a door and two signs at a Catholic church in Louisville, Colorado, about 20 miles northwest of Denver.

Incidents have occurred in 29 states.

The report referred to 12 incidents in California since May 2020, including the degradation and removal of a statue of Saint Junipero Serra in October 2020 and an arson attack in July 2020 that destroyed parts of a 249 missionary church. years in San Gabriel.

The report also cited 14 incidents in New York City, including anti-Catholic and anti-police graffiti outside St. Patrick’s Cathedral in January.

In some cases, dioceses have requested increased security following acts of vandalism.

The Brooklyn Diocese called for an increased police presence in May, after two incidents of vandalism at church properties in three days. A statue of the Blessed Mother holding the infant Jesus was discovered vandalized in front of the diocesan administrative offices, the beheaded Christ. A crucifix display outside a parish was also found overturned, with an American flag outside the parsonage burnt down. Both incidents were investigated as potential hate crimes.

â€œWe are certainly concerned that there is a pattern of hate crimes against Catholics,â€ said Mgr. Anthony Hernandez, the moderator of the curia of the diocese, in a press release following the attacks.

â€œOur nation finds itself in an extraordinary hour of cultural conflict,â€ Archbishops Wenski and Coakley wrote.

â€œThe way forward must be through the compassion and understanding practiced and taught by Jesus and his Blessed Mother. Let us contemplate rather than destroy the images of these examples of God’s love. Following the example of Our Lord, we respond to confusion with understanding and to hatred with love.

Women of the Year honored at the convention banquet