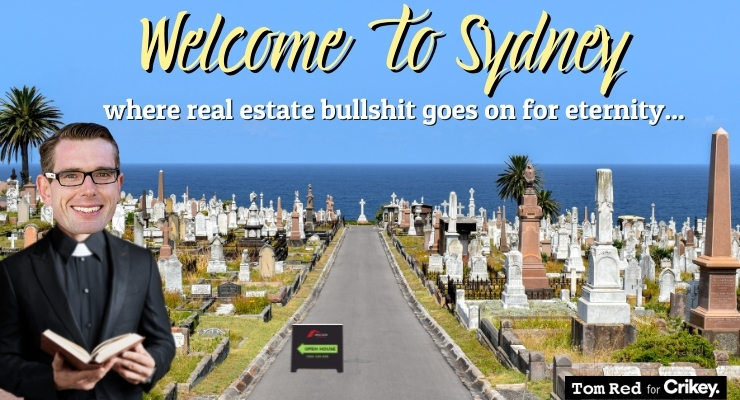 church or state on Catholic cemeteries?

New South Wales Prime Minister Dominic Perrottet is set to rename himself as a man of the center, but there remains the unexplained – and as yet unresolved – saga of how he, as State Treasurer, dealt with requests from the Catholic Church.

The problem is Sydney’s cemeteries and who controls their management. It’s also a story of power, influence, and how the church fights for its interests.

The highlight of the story is the claim that Perrottet, as treasurer, argued for the proposals supported by the Catholic Archdiocese of Sydney – despite an assessment by senior officials from two separate departments as the The church’s business case was not up to par.

Why is this important?

A year ago, a statutory review carried out by independent consultants did not doubt that the only way to solve the serious problems of Sydney’s cemeteries was to centralize management under a government agency called OneCrown.

For the Catholic Church, the plan meant ceding control of much of Sydney’s cemeteries to the government of New South Wales. He opposes this as secularizing death and campaigned to prevent it from happening. The church and its organization, the Council of Catholic Cemeteries (CCB), have developed counter-proposals.

There is a parallel claim that Perottet and other members of the government may have come close to breaking the ICAC’s rules on direct transactions – rules that dictate how the government must deal with a potential service provider to avoid the corruption.

Besides Perrottet, his friends in the government would be the Minister of Finance Damien Tudehope. Tudehope began his political career on the conservative right of politics as a spokesperson for the Australian Family Association, an offshoot of BA Santamaria’s National Civic Council (NCC).

Tudehope was also NSW chairman of the NCC before he found a home in the Liberal Party at his conservative religious base in the north-western suburb of Sydney. Perrottet, as Australia is beginning to learn, has a traditional conservative religious approach to issues such as abortion, voluntary assistance in dying, and same-sex marriage.

In response to Crikey’s questions, Tudehope said: “Any input or discussion I have had with my colleagues on this has nothing to do with my faith and everything to do with getting the best outcome for the people of NSW – something that every member of this government works towards every day.

“There is a process to follow and I have no doubts that we will achieve an outcome that is in the best interests of families and communities in NSW. ”

But is the church’s plan in NSW’s best interest?

Not according to NSW government bureaucrats.

Investment NSW concluded that it would cost “much more” than the management of cemeteries by a single state authority. This made it “difficult to demonstrate value for money.”

Investment NSW officials also concluded that adopting the church model may be a direct relationship with the Catholic Metropolitan Cemeteries Trust, a church-related organization that operates four cemeteries in Sydney – in part because there was “no evidence” that the CCB was the only party capable of meeting the needs of the functioning of the Sydney cemeteries. In fact, Catholic organizations “may be unable to meet the needs of other faith groups.”

Despite this, the New South Wales Treasury, headed by Perrottet, continued to promote the church’s proposal. A document from the Treasury supporting it was submitted to the cabinet at the end of September. A senior official noted that the bid came in the short term and had no input from other government departments. The manager also noted that the proposal did not meet any criteria defined by independent consultants.

Crykey asked Perrottet for comments but received no response.

Last month, the Lebanese Muslim Association (LMA) sent a legal letter to the government threatening to take action on the “uncompetitive, unapproved and unsolicited” proposals that the Catholic Church had presented to several ministers and government agencies in an attempt to persuade them to abandon the idea of â€‹â€‹an independent state-run body.

Muslims are one of many faith groups concerned about the dwindling supply of cemeteries in Sydney.

The LMA asserted that the government’s â€œexclusive and repeated transactionsâ€ with the Catholic Archdiocese violated the ICAC’s rules on direct transactions, and that the ICAC should be made aware. He also reported on a series of meetings between the government and representatives of Catholic organizations that had taken place before, during and after the official overhaul of cemeteries.

It all started in July 2017 with a meeting with Perrottet when he was treasurer and minister of industrial relations. Between August and September 2017, there were further meetings between members of the Catholic-led consortium and officials from the Treasury and Perrottet office.

Since 2018, there have been several meetings with other ministers as the Catholic Church defended its cause. In June of this year, the church met with the then Prime Minister, Gladys Berejiklian. Two days later, then Deputy Prime Minister John Barilaro intervened with a plan that appeased the anger of the church, ensuring that it “would continue to manage and operate cemeteries in Sydney”.

This “peace deal” was accompanied by a new proposal from the church in Barilaro requiring two consecutive 99-year leases for the cemetery land, the transfer of nearly $ 140 million in lifelong care funds to a company. Catholic and a 100-year exclusive operator agreement.

The government-commissioned independent report – the 11th Hour Report – showed that the government-owned trust, currently managed by the Catholic Cemeteries Board, would generate a cash surplus of approximately $ 1.2 billion over the 25 next few years, and over $ 5 billion in 50 years.

Links at the top

There has been both an open door and a revolving door between the NSW government and the organizations that run Sydney’s cemeteries.

Tudehope is a former governor of the CWB and a member of its board of directors. He resigned in 2015, a month before entering Parliament in NSW – in a seat vacated by former NSW Attorney General Greg Smith, who was later appointed chairman of the CBB. To complete the Trinity of Movements, Perrottet moved to Epping’s headquarters from Tudehope when Tudehope became a member of the upper chamber of NSW.

The Catholic Archbishop of Sydney, Anthony Fisher, has also been at the forefront of government – and has made his voice heard in the pages of the australian as well as on Sky News, where he appeared in office dresses and championing the cause of the church (and earning a sympathetic ear from Peta Credlin).

It is a measure of the stake that the Archdiocese of Sydney has shifted into full-fledged campaign mode for the government to drop the recommendations of the independent review.

Former Liberal Minister Michael Photios – now one of Australia’s most powerful lobbyists – has been recruited, along with veteran public relations Tim Allerton, one of Sydney’s best-connected operators.

The campaign also obtained legal advice from at least one authority Geoffrey Watson SC – the lawyer assisting the ICAC in a 2011 Liberal campaign finance investigation – that there is no case of “direct operation” to be carried out in the conduct of Catholic organizations.

Watson is a member of the board of directors of the Center for Public Integrity and an assistant professor at the Catholic higher education institution of the University of Notre Dame. He declined to comment on whether or not he had a conflict of interest, citing client confidentiality.

The Archdiocese has threatened to campaign in seats of state where there is a high proportion of Catholics, and also sacked the New South Wales Minister of Water, Property and Housing, Melinda Pavey, who is directly responsible for the cemeteries.

In a media statement, the church pulled out one of its biggest guns, Danny Casey, to unload on Pavey. Casey is Director of the CCB, alongside former New South Wales Attorney General Greg Smith. Specifically, Casey is also the former consigliere of Cardinal George Pell and spent time with Pell in the Vatican before returning to Australia.

Casey said the board was “shocked” that Pavey and his “faceless bureaucrats” alongside a “fringe religious association” attempt to “undermine” a pledge made by Barilaro to retire via “spurious allegations” “. (This “fringe organization,” the LMA, is a non-profit organization which it claims is responsible for about 80% of Islamic funerals.)

â€œIt is not surprising that Minister Pavey is seeking to merge the Catholic Metropolitan Cemeteries Trust with OneCrown, which, after many years of mismanagement, faces a deficit of $ 160 million while the CMCT has about the same amount of surplus, lifelong care funds to ensure many faith groups can bury their dead, â€Casey said.

The message is clear from above: don’t mess with the Catholic Church.

Pavey was a possible candidate to take the leadership of Barilaro’s National Party. She did not succeed. Perrottet could also reshuffle cabinet posts – good luck. Crykey left no doubt that Pavey won’t do well if the church has anything to do with it.

It’s time to reserve your next dose of Crikey.

News reaches you quickly throughout the week. Every day there is a new disaster, depressing numbers or scandal to scroll. It is exhausting and not good for your health.

Reserve your next dose of Crykey to master all that. Subscribe now and get your first 12 weeks for $ 12. And you will help us too, because every dollar we receive helps us dig even deeper.

Deacon retreat centered on the Beatitudes