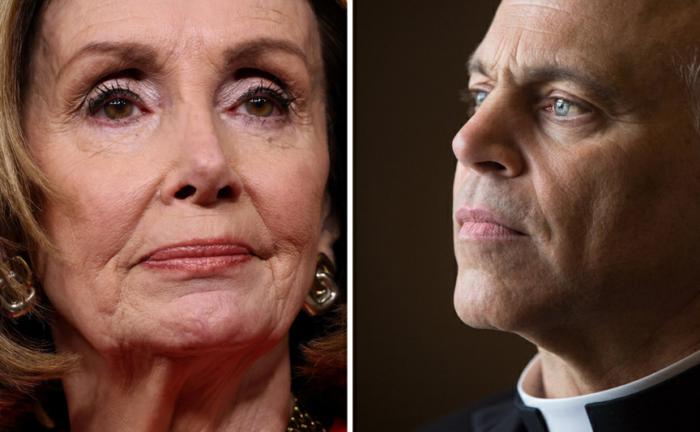 Echoes. To guarantee sacramental integrity, ecclesial communion and the salvation of souls. Posted on 06/15/2022

Guaranteeing sacramental integrity, ecclesial communion and the salvation of souls

Help us expand our reach! Please share this article on social networks

Never refusing anyone Holy Communion is equivalent to the Blessed Mother never refusing to give the Child Jesus to anyone, including Herod’s minions.

On May 20, Archbishop Salvatore Cordileone of San Francisco sent a letter to Congresswoman Nancy Pelosi, Speaker of the United States House of Representatives and a resident of the city, advising her that “you must not present for Holy Communion and, if you do so, you must not be admitted to Holy Communion, until you publicly repudiate your plea for the legitimacy of abortion and confess and receive absolution of this grave sin in the Sacrament of Penance.”

The letter was the result of many years of failed pastoral efforts by Archbishop Cordileone to persuade President Pelosi of the error and immorality of her support for abortion. It was also a direct result of his refusing various requests to discuss one-on-one his more recent push to codify the Supreme Court’s Roe v. Wade decision into federal law as well as his failure to respond to her April 7, 2022, letter warning him that unless she publicly repudiates her advocacy of abortion, or refrains from referring to her Catholic faith in public and receiving Holy Communion, he should issue such a decree, in accordance with Church law.

Those who “willfully persevere in manifest grave sin,” says canon 915, “should not be admitted to Holy Communion,” and President Pelosi’s persistent public support for the intentional killing of unborn human beings, though corrected privately by his archbishop, certainly meets the canonical description.

Bishop Cordileone – who says he finds “no pleasure in accomplishing [his] pastoral duty here” – is simply doing its job, for the sake of Speaker Pelosi’s soul and to remedy the outrage and confusion her actions are causing regarding the evil of abortion and the worthy reception of the Holy Communion.

Despite the lucidity of canon 915 and a 2004 letter to the U.S. bishops from Cardinal Joseph Ratzinger (the future Pope Benedict XVI) applying it to the situation of abortion and euthanasia, most U.S. bishops have been reluctant to apply the Canon. They preferred to emphasize canon 916, which says that a person aware of a grave sin should not receive communion without prior sacramental confession. In their November 2021 document, “The Mystery of the Eucharist in the Life of the Church,” for example, the U.S. bishops reiterated: “If a Catholic, in his personal or professional life, knowingly and stubbornly rejects the doctrines defined by the Church, or … deny its definitive teaching on moral questions, … he must abstain” from receiving Holy Communion (48).

But what happens when someone – despite the precision of Church teaching on abortion and the norm that those who consciously and stubbornly reject Church teaching on abortion should abstain from receiving Holy Communion – come to receive anyway? What happens when a bishop meets with a member of his flock to discuss the incongruity of the person’s public actions and commands the person to abstain, but the person defies the instruction?

The U.S. Bishops, in their November Pastoral, say it “is the particular responsibility of the diocesan bishop to work to remedy situations that involve public actions contrary to the visible communion of the Church and the moral law “, which Bishop Cordileone sought to do with President Pelosi, unfortunately in vain. The U.S. bishops did not state unambiguously, in accordance with canon 915 and the 2004 Ratzinger letter, that the bishop must refuse, but they did say that the diocesan bishop in question has a responsibility to “maintain the integrity of the sacrament, the visible communion of the Church and the salvation of souls” (49).

The integrity of the Eucharist is at stake when those who persist outrageously and uncompromisingly in grave public sin, such as support for abortion, continue to receive in a sacrilegious manner. Moreover, the Church’s visible communion is fractured when those who consciously separate themselves from what St. Justin Martyr in the second century described as doctrinal, sacramental, and moral communion nevertheless claim they are in communion. And the salvation of souls is at stake when people live and die in a situation of grave unabsolved sin, rejecting communion with the truth of the faith on abortion and with the love of our least made neighbours. picture of Christ. Those who consume the Eucharist in a state of sin, St. Paul affirms, “must answer for the body and blood of the Lord” (1 Cor 11:27) and, as St. Thomas Aquinas warns in the “Lauda Zion” , “Good and bad, the party is shared, of what various misfortunes prepare: endless death or endless life.” This is what is at stake.

Many bishops and faithful are hesitant, for various reasons, to publicly support Bishop Cordileone’s decision. The biggest problem, they say, is getting people back to Mass and Communion, and it is counterproductive to focus on denying Holy Communion to those who still attend. They fear that by remedying the scandal caused by a pro-abortion politician, the Church will cause a greater scandal by giving the impression that the Church allows the Eucharist to be manipulated for partisan political ends, or by discouraging those who disagree with the teachings of the Church of believing that they are still valued members of the family. Some note, further, that because some parishes are effectively pro-abortion, and those in President Pelosi’s situation will still receive Holy Communion somewhere, such a decree, rather than strengthening visible communion, could undermine it. .

But even if people are uncomfortable and distanced themselves from Bishop Cordileone’s direct application of canon law and its potential consequences, the unambiguous message from the Church – prelates and faithful – should be a resounding one: “ President Pelosi absolutely should not receive Communion.” The U.S. bishops’ document, which was adopted 222-8 last November, and canon 916 make this very clear.

When a bishop, or a prominent Catholic voice, walks away from Bishop Cordileone’s action, without simultaneously emphasizing, “but we all agree that she should not receive Holy Communion”, such action does not can only suggest by omission – shockingly – that President Pelosi, despite her stubborn advocacy for abortion, will indeed receive Holy Communion.

Some prelates have declared that they would never refuse Holy Communion to anyone, including those who persist in committing manifest grave sin. Such a statement suggests they wouldn’t turn down a busy abortionist who just finished a full Saturday, a Satan worshiper wanting to steal Communion for a sacrilegious ritual, a mobster or a serial killer at school trying to entertain with blood dripping from his hands, a Ku Klux Klan imperial wizard wearing his hood, a human trafficker clutching his teenage victim, an outspoken atheist militant or a non-Christian with no idea what the Eucharist is.

Never refusing anyone Holy Communion is equivalent to the Blessed Mother never refusing to give the Child Jesus to anyone, including Herod’s minions. This is the opposite spirituality of Saint Tarcisius, who gave his life to protect the Blessed Sacrament from teenage gang members wanting to desecrate it. Such abandonment is not a badge of honor, but a cowardly failure of eucharistic stewardship and love for Jesus in his extreme eucharistic vulnerability.

Other critics claim that abortion isn’t the only serious issue and that President Pelosi isn’t the only outrageous figure to violate canon 915. Both are true. But such a fantasy proves rather than undermines the importance of Bishop Cordileone’s action: the path to remedying other such scandals, after all, has to start somewhere.

Others who have criticized Bishop Cordileone’s action have quoted Pope Francis’ words that the Eucharist is not “a prize for the perfect but a powerful medicine and nourishment for the weak” (“Joy of the ‘Gospel’, 47). The American bishops point out in their recent document, however, that the “weak” refer to those who have venial, not mortal, sins (45). Pope Francis himself has regularly distinguished “sinners” from “corrupt”. Sinners, he says, are those who recognize they have been wrong and humbly approach God’s mercy. The corrupt, on the other hand, are “solidified in sin”, “varnished putrefaction” refusing to acknowledge that they have sinned. Those who stubbornly persevere in manifest grave sin are, in the terminology of Pope Francis, “corrupt,” not weak. They are not beyond God’s mercy, but they must first recognize that and why they need it.

– Father Landry is a priest from the Diocese of Fall River who is national chaplain for Aid to the Church in Need USA, papal missionary of mercy and missionary of the Eucharist for the American bishops.

Help us expand our reach! Please share this article on social networks