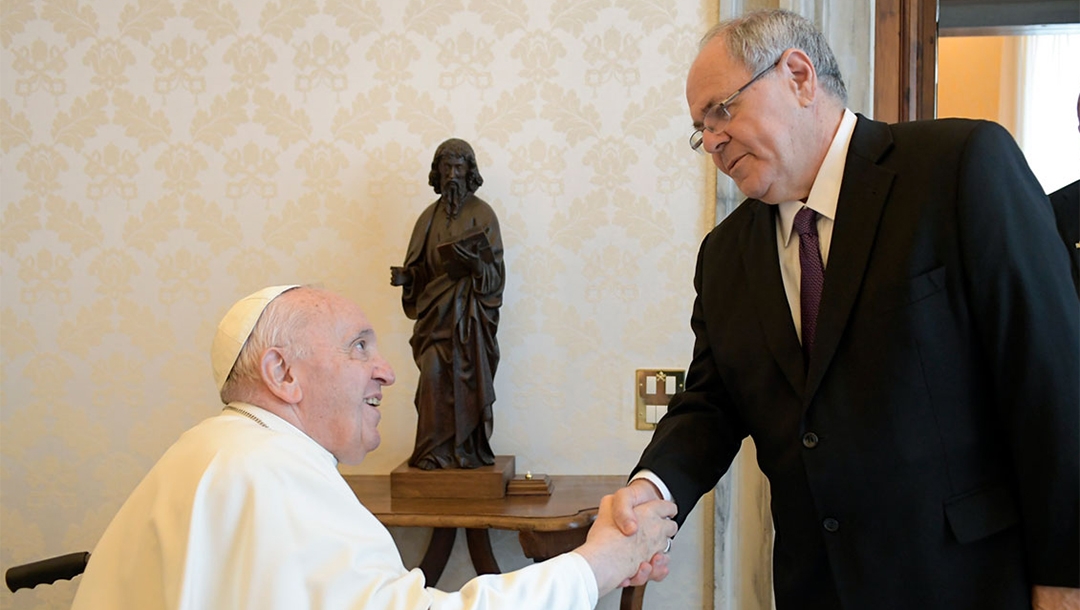 (JTA) — Amid controversy over the Vatican’s Holocaust archives, Pope Francis and the director of Israel’s State Holocaust Museum, Yad Vashem, met for a one-of-a-kind interview .

Yad Vashem director Dani Dayan met with the pope Thursday at his office in the Vatican. During their 30-minute conversation, they talked about ways to “strengthen collaborative activities” in the areas of “Holocaust remembrance, education and documentation, and discuss efforts to combat against anti-Semitism and racism in the world,” Dayan’s office wrote in a statement.

Dayan thanked the pope for his decision in 2020 to open the Vatican archives linked to wartime Pope Pius XII, who critics say he did too little to intervene on behalf of the 6 million Jews that the Nazis murdered during the Holocaust.

But they did not discuss Holocaust-related controversies that have strained Jewish-Catholic relations for years, Dayan told the Jewish Telegraphic Agency. Instead, Dayan focused on areas of consensus and strengthening ties with the Vatican, he said.

One of these controversies is the ongoing beatification of Pius XII. Another relates to other archives that Holocaust researchers say are still inaccessible to them. And another centers on the debate over whether the Vatican should acknowledge and provide more detail about what Pius XII did during the Holocaust.

“You don’t sit down with the pope on specific issues. You sit with the pope on the big issues, on the principles, on the headlines,” said Dayan, a former consul general of the State of Israel in New York who became the head of Yad Vashem the year when asked if he raised any of these issues during the meeting.

When asked if he had made requests, Dayan replied, “No need to make requests – of course, not requests – when all our requests are handled diligently. We are completely satisfied with the attitude of the pope personally and of the Catholic Church, the Vatican.

Certainly not David Kerzer, professor of Italian studies at Brown University whose 2014 book on the pope’s ties to fascism won a Pulitzer Prize.

Kerzer this week published a new book titled “The Pope at War: The Secret History of Pius XII, Mussolini and Hitler” based on archives opened in 2020 by the Vatican. He told the Jewish Telegraphic Agency on Thursday that he hopes the pope will consider “changing the course of the Vatican regarding the continued denial of the Church’s role in the demonization of Jews that has helped make the Possible Holocaust. And also maybe to reconsider if they really want to make Pius VII a saint.

A commission set up in 1998 by the Vatican concluded that the centuries in which the Catholic Church espoused anti-Jewish sentiments as official policy did not lead to the anti-Semitism that fueled the Holocaust.

The commission’s findings, which have been Vatican policy, are that “anti-Judaism” based on Church theology was essentially unrelated to “Nazi anti-Semitism based on theories contrary to the constant teaching of the Church”.

Kerzer is one of many critics of this reading of history. These critics argue that the centuries of persecution of the Jews carried out by the Catholic Church in some way paved the way for the Nazi genocide.

“Forcing Jews to wear yellow badges and keeping them locked up in ghettos were not inventions of the Nazis in the 20th century, but a policy that popes had championed for hundreds of years,” Kerzer noted in a 2001 New York Times op-ed.

On Thursday, Kerzer said the Vatican deserved praise for the decision. But, he added, “there are limits” to access to other archives, including the Vatican Secretary of State’s archives and some Inquisition-related archives.

Still, Kerzer said he was “not in a position to say what Mr. Dayan should or should not have said during the meeting” with the pope.