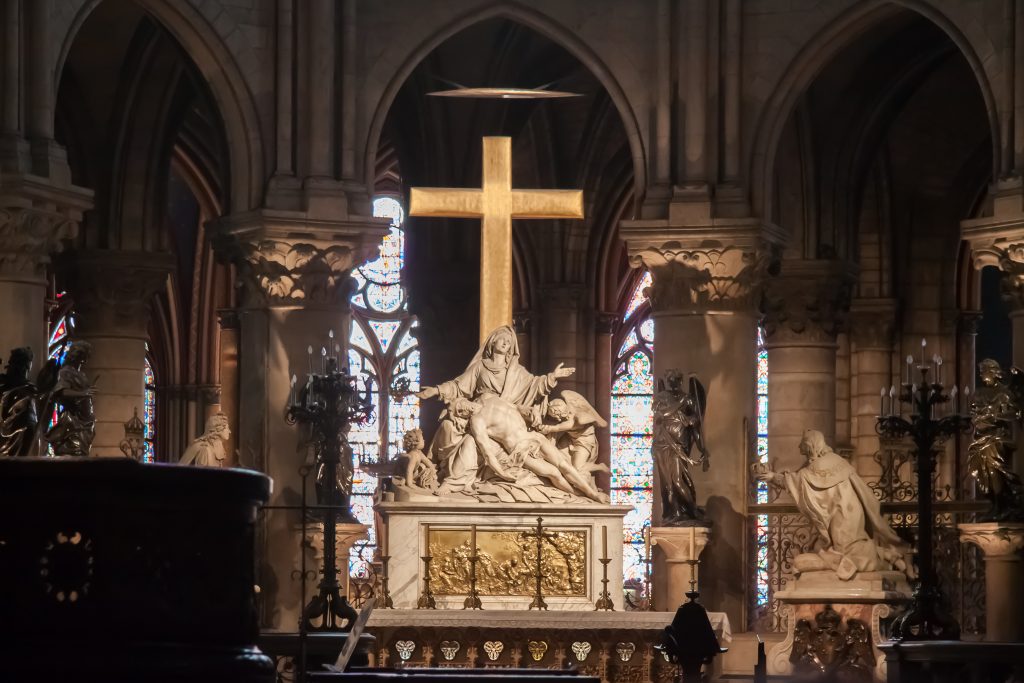 The historical events that made Mary even greater

I was born at the end of Baby Boom in a Sicilian neighborhood. Our parish served immigrants from two villages: Serra di Falco and Monte d’Oro. Each village had a feast day, and for both it was Marian: Our Lady of Sorrows and Our Lady of the Rosary.

Every year, on the Sundays closest to these holidays, the men of the parish attached a life-size statue of Mary to a platform, then carried it through the streets in a procession that stopped traffic and always ended with a fire. fireworks.

The processions were an important marker of our identity – as Sicilians and as Catholics. But my generation left the neighborhood and many of us got married outside of our tribe.

In leaving, we tended to leave behind markers of ethnic and religious identity. The important identity for us was American, and the ancient processions did not to feel American.

American culture was Protestant, and our boisterous love for the Virgin seemed patently foreign and devoid of decorum. We wanted to fit in, so we tried to make our religion look American. The Rosary is out of fashion.

But the trend did not last long. Main Protestantism quickly declined steeply. And Pope John Paul II appeared on the scene, waving his rosary and invoking Mary in everything he proclaimed.

There was a resurgence of Catholic identity, and it was uniquely Marian. Yet it was not at all foreign. In fact, he started to feel American.

So how did this happen? The same way she always has throughout history.

In the gospels, it is the context of the beginning of the story of the Messiah. She consents to the angel’s proposal, and the Messiah finds his home in her. She acts in his name by welcoming the shepherds and the Magi who arrive to worship him. They find the child with Mary his mother – and this is where all generations since have found him.

Mary shows herself a mother through the stories of Jesus’ childhood. She is anguished when he is lost and is delighted to find him. Saint Luke sums up Jesus’ adolescence by observing that he was â€œobedientâ€ to his parents. This tells us everything we need to know about Mary’s character. God himself chose to obey him.

Nonetheless, we find a reversal of roles early in Jesus’ public life. After her baptism, Mary appears as the model disciple of her son. When he was told, â€œYour mother and brothers are standing outside wanting to see you,â€ he replied, â€œMy mother and my brothers are the ones who hear the word of God and put it into practice.

Mary was then more blessed for her state of disciple than for her motherhood. She was the one who heard the Word of God and kept it – in the most physical way possible. She became his disciple, but she remained his mother.

It was she who launched her ministry of wonder. She was with her son at a wedding and the host was running out of wine. She simply pointed out to Jesus: â€œThey have no wine.

He made the strangest answer: “O woman, what have you got to do with me?” My time has not yet come.

God incarnate seems to know the predestined time for His manifestation to the world – and this wedding feast was not this. Yet he brought forward the moment for his mother’s sake! He turned water into wine and he saved the party.

“Virgin and Child”, by the workshop of Sano di Pietro, circa 1448-60. (The Metropolitan Art Museum)

After the death and resurrection of her son, at the beginning of the history of the Church, she remains with the disciples in the Upper Room while awaiting the Holy Spirit.

It would be essential to their proclamation. When Saint Paul sums up the Gospel, he says: â€œGod sent his Son, born of a woman, born under the law. Born of a woman. Why is this one of only two details he chooses to include?

The next time we see Mary, it’s in the book of Revelation. She is crowned with stars, appearing as a queen, after being taken body and soul to Heaven. It was a rare honor which, according to Jewish tradition, had only been bestowed on Moses and Elijah.

In the New Testament, she is mother, model disciple, intercessor, companion in the Church and finally queen of heaven and of history. She is a true mother, and that is why she always engages with the Church through the centuries that follow.

In the first centuries of the Church, it is evoked in the works of Saint Ignatius of Antioch and of Justin Martyr. Saint Irenaeus in France speaks of her as the “defeat of the knots” and the new Eve, as Tertullian does in North Africa.

The term â€œMother of Godâ€ appears in archaeological records around AD 200, and it soon becomes the most popular form of address for Mary. It was not until the 5th century that a Christian raised doubts about the title. He was Nestorius, the bishop of Constantinople, and in his city he ordered that the term be struck out of hymns and prayers.

But he failed. Its people organized public demonstrations. They complained to the emperor and the pope. They argued that Nestorius couldn’t be right because he opposed the faith they had learned from their grandparents. They invoked the full weight of Scripture and tradition.

To restore peace, the emperor convoked the Council of Ephesus. At the Council, the Bishop of Alexandria, Cyril, demonstrated that the Church had always used the term â€œMother of Godâ€. When Nestorius argued that a mother should precede her son, Cyril responded with the historical facts: Mary did not precede God, but she undoubtedly mothered him. The Scriptures designate her as the mother of Jesus, and Jesus is God.

Nestorius replied that Mary was mother only of Jesus’ human nature and not of his divine nature. In response, Cyril observed that a mother does not give birth to a nature, but to a person, and that person is divine. To separate his divinity from his humanity, as Nestorius did, was to divide Christ in two. And it was heresy.

Cyril’s arguments prevailed. And when the bishops came out of the council chamber, they found a huge crowd gathered. Ordinary people had traveled far and wide in miserable heat – because this advice was for their mother. When they learned of the bishops’ conclusions, they burst into joy and sang hymns.

The Council of Ephesus took place in AD 431, and it confirmed the Marian devotion of Christians who had lived in every century until then.

Two hundred years after Ephesus, the Christian lands of the East would be submerged by Arab invaders carrying a new religion. This religion, Islam, was imposed by force.

It is at least debatable that the Islamic invaders could not have succeeded if they had not found a way to accommodate the people’s affection for Jesus and Mary. Thus, both appear in the Quran and in the secondary literature of Islam.

Irish monks of the Dark Ages continued to write hymns to the Virgin and paint her picture in the Gospel of Kells. Mary inspired the builders to build the great Gothic cathedrals, many of which were named for her (our Lady). She inspired monks to develop a new technology for stained glass, to illuminate its image.

At the time of the Black Death, in the mid-1300s, Mary appeared everywhere in a new art form: the pieta. During the plague, hundreds of millions of people died across Europe. The continent was in mourning, and suddenly the pieta replaced earlier and more glorious images of the Virgin. Now Europe has prayed in front of the sculptures and paintings of the grieving mother holding the lifeless body of her divine Son. And the people saw that she was with them in their grief.

With the Protestant Reformation, the role of Mary was eclipsed for many. Martin Luther tried to cling to Marian doctrines while abandoning the devotions. John Calvin had no such qualms, and he even rekindled Nestorius’ error by rejecting the title of Mother of God.

Yet just as millions of people left the Church in Europe, millions entered the New World. Although the conquistadors and missionaries failed to convert the native peoples, Mary did. In 1531, she appeared in Guadalupe to a poor man named Juan Diego. And she did what money and the law could never do. She converted a continent in a few years.

Then, forty years later, it prevented fractured Europe from succumbing to Muslim invaders. As the Ottoman fleet moved forward, Pope Pius V urged the Catholic people to pray the Rosary. And on October 7, 1571, at the Battle of Lepanto, the motley navy of Christendom prevailed over the Sultan’s fleet. The Blessed Virgin – and an army of common people praying their Rosaries – received credit when a new feast day was added to the calendar.

The story continues into the modern era. There were apparitions – rue de Bac, Lourdes, Fatima and elsewhere.

What about the future?

I see it in a picture of Marie that I keep in my office. It’s from India, and it’s painted on a sheet of pipal.

The Church is growing. If it seems weakened in the West, it is developing in the South and East of the planet. The paint on the pipal leaf is a sign of this growth and the promise of the future. Every crisis in Church history has led to surprising – often provoked – developments not by the rich and the powerful, but by the poor who stand with Mary and prayâ€¦ and are happy to make noise as they carry her image in the streets.