What is a senior Christian anyway?

(RNS) – Is it a denomination? Is it a set of theological beliefs? Is this the type of church you attend? How exactly do you define a senior Protestant Christian?

It’s a question asked by many on Thursday, July 8, after the Public Religion Research Institute polling station unveiled a new survey that showed white Protestant Christians outnumber white evangelical Christians in America – a marked change that surprised some observers.

To be fair, many were asking the question long before this survey – including mainline Christians, who often don’t use the term to describe themselves. (Not to mention the great amount of ink spilled in the effort to find a precise definition of the term “evangelical” – an ongoing debate.)

Much like their evangelical step-cousins, the principals are in the midst of their own identity crisis – and who is in and who is out depends somewhat on who answers the question.

Pollsters such as PRRI and others often apply a broad brush, using “the white Protestant mainline” to describe people who identify as white, non-Hispanic, and Protestant, but who do not consider themselves evangelical or ” born again â€.

The nickname has taken on a more precise meaning in common parlance, although its origins are somewhat murky: some believe it originated in the Philadelphia suburb known as the “Pennsylvania Railroad Main Line” which historically housed mainly churches. white and rich. Regardless of the source of the title, major Protestants are most often associated with a range of older Protestant denominations, such as The United Methodist Church, The Evangelical Lutheran Church of America, The Presbyterian Church (United States ), the Episcopal Church, the Christian Church (Disciples of Christ) and United Church of Christ, among others.

Established institutions differentiated the main supporters from some early 20th century fundamentalists, many of whom were later renamed evangelicals and belonged to more diffuse communities in various ways. The National Association of Evangelicals defines evangelical tradition according to a set of theological beliefs known as the Bebbington Quadrangle, but the exact parameters of evangelism remain, again, a subject of heated debate. And while large denominations such as the Southern Baptist Convention exist, many evangelicals remain unattached denomination to this day.

For their part, the main demographics vary from church to church, with many congregations exhibiting a wide range of economic and racial diversity. But statistically, the main lines tend to resemble their historical (probable) namesake, with a white bias and relatively rich. Their members can also be influential: the lion’s share of US presidents – including Barack Obama, who came to Christ in a UCC church, and Donald Trump, who initially identified himself as Presbyterian – have come from major traditions at a time of their life, if not during their presidency.

Major traditions have diverged from evangelicals in several ways throughout the 20th century, generally supporting more liberal theological positions. Early movements such as Social Gospel, which decried social injustices such as economic inequality and child labor as sinful, had a lasting impact on both political progressivism in the United States and mainstream Protestantism, informing the clergy who then participated in the civil rights movement.

During this time, mainstream Protestantism often served as a counterweight to evangelicalism. The National Association of Evangelicals and the publication Christianity Today, for example, have been seen or explicitly founded as counterpoints to the Federal Council of Churches (now the National Council of Churches) and to the Christian Century, two predominantly Protestant projects.

The main leadership always tends to be liberal. Several (but not all) major denominations now officially ordain women and LGBTQ people, for example, or perform same-sex marriages – something many evangelical Christians refuse to do. Leaders from various mainstream traditions have also sharply criticized former President Trump, many of whom have participated in protests against his policies. 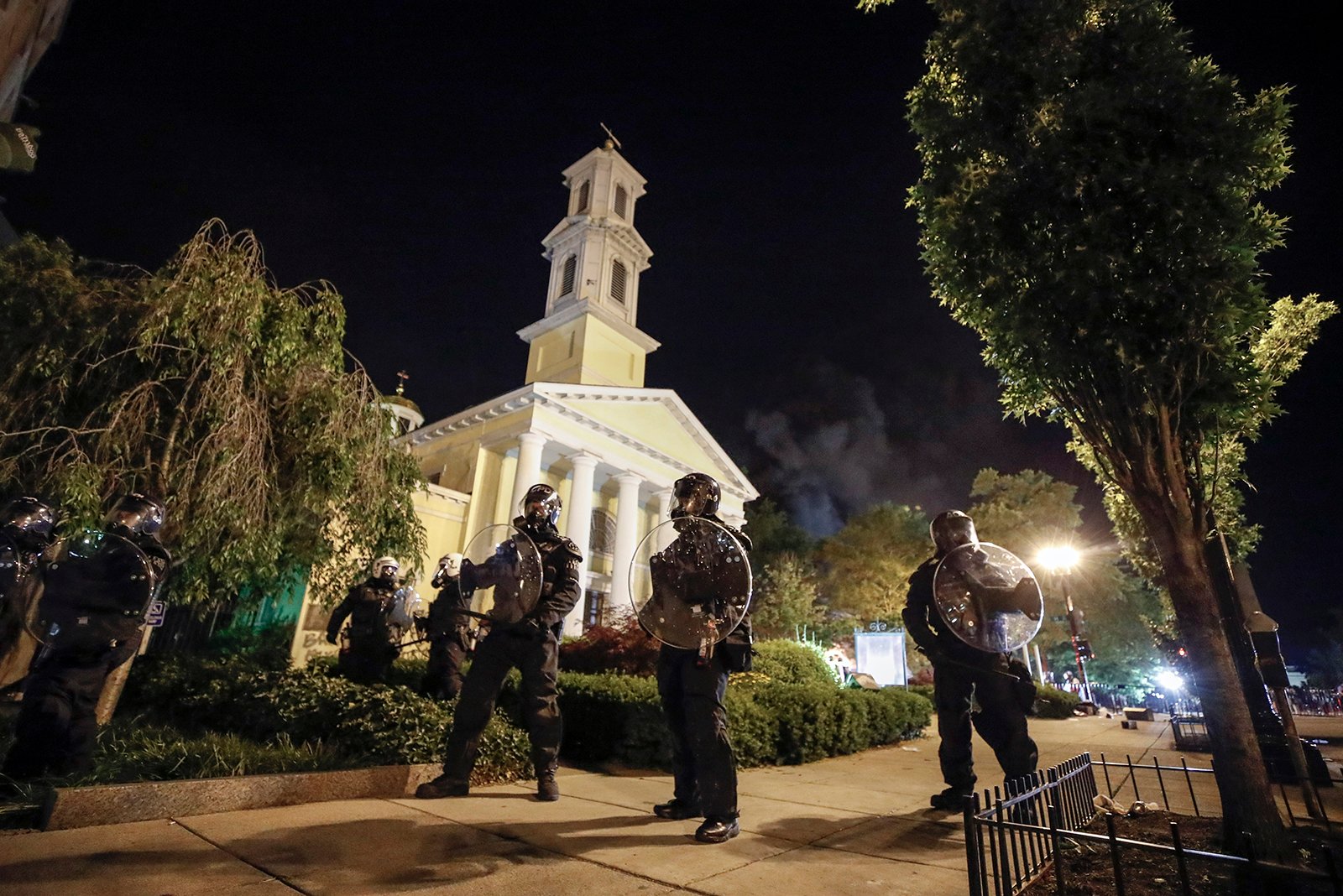 Police form a line on May 31, 2020, outside St. John’s Episcopal Church near the White House in Washington, DC, as protesters protest the death of George Floyd in Minneapolis. Floyd died after being detained by Minneapolis police officers. (AP Photo / Alex Brandon)

Through collaborations with interfaith clergy and black Protestant leaders, senior clergy have repeatedly found themselves in direct confrontation with Trump during his presidency, as well as with his supporters. When police forcibly evicted hundreds of racial justice protesters from Lafayette Square in Washington in June 2020, law enforcement also kicked out an episcopal priest and a seminarian who were helping protesters from the grounds of the Episcopal Church. St. John’s across the street. When Trump walked through the empty park and waved a Bible outside the church shortly after, the Episcopal Bishop of Washington – who oversees St. John’s – condemned him.

The cycle repeated on January 6, 2021: Shortly before insurgents stormed the United States Capitol, a group of interfaith clergy – including members of the mainline – broke into gathered around a Black Lives Matter sign outside an ELCA church as a prayer counter protest against Trump supporters who had descended on Washington, DC to denounce the election of Joe Biden as President .

Yet the main benches are filled with a more politically diverse group than their pulpits, though they are still less conservative than evangelicals. According to PRRI, 33% of top leaders identify as Republicans, 35% identify as Democrats, and 30% identify as independent.

Additionally, many main traditions have split several times over the past century, giving rise to smaller, more conservative iterations. For example, the Lutheran Synod Church of Missouri is seen as more theologically conservative than ELCA, just as the Presbyterian Church in America is a more conservative break from what has become the PC (US). .

Like many religious traditions, the major ones often contradict careful definitions. Some who attend mainstream churches – especially the more conservative ones – may identify as evangelical or born again, even if other members of the tradition do not. Others may change traditions over time: Trump identified himself as Presbyterian when he was elected president in 2016, but identified as a “non-denominational Christian” when he left office.

Some polling stations have started to take a more complicated look at the term. PRRI updated its most recent poll to designate the group as â€œWhite Mainline Protestants (Non-Evangelicals)â€ and Pew Research, which used the same rubric to define mainlines for a while, recently changed the category title in “Protestant white, not evangelical.” . “

In an email to Religion News Service, Greg Smith, associate director of research at Pew, explained that his team still uses “white mainline Protestant” to categorize people who list specific affiliations with traditionally denominations. described as the main line. But when using the less specific method, he argued that the broader category is a more precise way of describing the question under investigation.

â€œWe made this change in labeling because the label ‘Protestant white, not evangelical’ is a more accurate representation of how Protestants describe themselves when we measure religious affiliation in this way,â€ he said. -he declares. â€œThey told us that they did not see themselves as born again Christians / evangelicals. They didn’t tell us that they identified with a major denomination.

As for the main denominations, their churches have seen a general decline in membership in recent years. PRRI data suggests that could change, but even if it doesn’t, top leaders have yet to give up their voices in the public arena, especially when it comes to liberal activism: both Co-Chairs of the influential Poor People’s Campaign – Rev William Barber and Reverend Liz Theoharis – belong to the main traditions (Disciples of Christ and PCUSA, respectively).

Ordination lessons learned in a crisis